Despite its young age, Desktop Metal is making waves in the 3D printing industry. The company was founded in October 2015 by an all-star team of 3D printing experts with a common goal—making metal 3D printing more accessible by tackling the challenges in this area, including cost, quality, speed and safety. 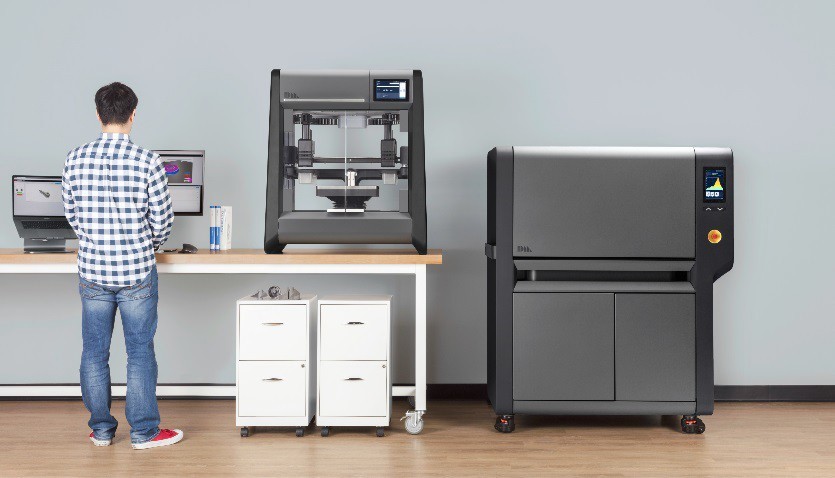 The DM Studio System is the world’s first affordable, office-friendly metal 3D printing system.Desktop Metal’s first 3D printer, the Studio System, was launched in May 2017. The Studio System consists of three parts—the printer, a debinder, and a furnace. The printer doesn’t use lasers or metal powder, but instead heats and extrudes bound metal rods in a proprietary process the company calls Bound Metal Deposition (BMD), similar to Fused Deposition Modeling (FDM). Because the system doesn’t use lasers or powders, it’s safe for the office—hence the Desktop portion of the company’s name.

Next, the printed part is placed in the debinder in order to prepare it for sintering. Since the debinder has a low emission design that requires no external ventilation, it’s also safe for office use. Automatic fluid distillation and recycling eliminate the need to refill after each cycle.

In the final step, the part is placed in the furnace and heated just below its melting point in order to remove secondary binder, causing the metal particles to fuse together and the part to densify up to 96- 99.8%, without the residual stresses introduced in laser-based systems. The furnace can reach temperatures of up to 1400 degrees Celsius, allowing it to sinter a wide range of metals.

While the Studio System is ideal for metal prototyping or low volume manufacturing, the company’s Production System is billed as the “first metal 3D printing system for mass production.” This system uses metal powders in combination with a proprietary Single Pass Jetting process to deliver parts fast. The Production System will be available in 2019.

Desktop Metal bills its technology as a faster, more cost-effective alternative to the traditional ways of mass manufacturing metal parts, like casting. While these are important factors for customers looking to purchase a 3D printing system, another question remains—how accurate are the systems? Will the parts being mass produced by metal 3D printing meet the same tolerances as the parts produced by traditional methods?

The company ended up selecting the ATOS Capsule structured blue light scanner from Capture 3D. The ATOS series of high quality industrial structured blue light 3D scanners provide precision scans with detailed resolution at high speeds. The ATOS Capsule is designed for use on very small to medium sized parts, and can easily pick up fine details and edges on those smaller parts. For example, ATOS Capsule is typically recommended for first article inspection of gears, turbine blades and wheels as well as medical parts.

Joe Danner, R&D Operations Manager at Desktop Metal, said that the 3D scanner has been an essential tool for the measurement and inspection of 3D printed parts, and the verification and dimensioning of internal printer components as well.

“The 3D scanner gives us the ability to be flexible with what we’re inspecting, because with such a broad base of customers that we’re supporting, you never really know what you’re going to get,” said Danner. “Having the 3D scanner has helped us greatly in that we’re able to basically measure anything we want to measure that will fit on the scan bed.”

Another key benefit is that the digital file is always available due to the software’s digital archiving feature. “Sometimes, when we scan parts, engineers take them afterwards and go do tests where they might cut it up or something like that,” said Danner. “So we won’t have the physical part anymore, but then they come back to us, saying, you know what, I didn’t get to see what this measurement was? Can you guys get it for me? And the fact that we have that data helps us out a lot.”

With 3D printing becoming a more and more viable alternative to traditional means of manufacturing, producing accurate parts is critical. Danner said that many of Desktop Metal’s customers are looking for a faster, more efficient way to manufacture a part that is normally cast—without compromising part accuracy.

“What the customer is looking for is not your traditional print and dimensions based on your datums— though some customers do ask for that—they’re more interested in how close to the nominal size the 3D printer is capable in producing,” Danner said. Inspection data obtained by the ATOS Capsule 3D scanner can be compared to the customer’s CAD file and any deviations can be found quickly.

“With the heat map function, we’re able to pinpoint that data, to present to a customer and say, ‘Yes, we’re able to print within this tolerance with repeatable results,’” Danner said. The 3D scanner “speaks the customer language” with regard to what they’re looking for when shopping for a 3D printer.

The 3D scanner also captures unusual and complex geometries, which Danner emphasizes is essential for the 3D printing industry. “A lot of companies want to take advantage of developing complex structures within their parts that would be much stronger but require a lot less materials,” said Danner. Those structures often cannot be produced with traditional machining, so the 3D printing process allows companies to overcome traditional constraints. “The 3D scanner ties in really well with that because it gives us the ability to see how close we are to printing something that’s irregularly shaped,” Danner explained.