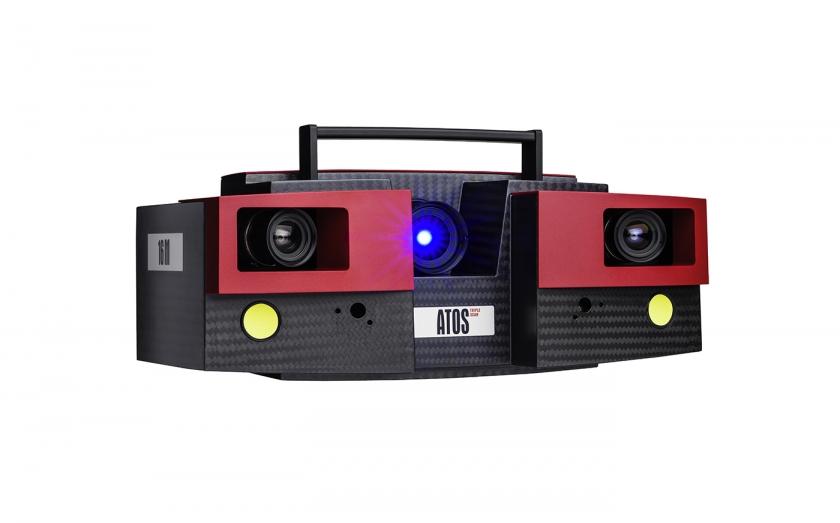 Applications include measuring and inspection of complex, detailed parts and components or for applications where fine details or edges play an important role.
Fringe projection scanners of the ATOS Triple Scan series perform full-field and non-contact part measurements. All models follow the 3-in-1 sensor concept: ATOS Triple Scan uses the left and right cameras individually in combination with the projector. This method results in three sensors each with different viewing perspectives of the object. During a single scan, three views are captured, instead of just one. Even when scanning complex parts, the measuring process is accelerated, due to fewer single scans. Scanning in deep pockets is a further advantage of this concept. In addition, the scanners operate with Blue Light Technology. Due to the blue light of the LED projection unit, measurements can be carried out regardless of ambient lighting conditions and surface structure. Based on the scans, the GOM software automatically determines the 3D coordinates in a high-resolution point cloud (ASCII/STL). The generated polygon mesh describes freeform surfaces and primitives which can be compared with the drawing or directly with the CAD data during shape and dimension analysis.

Besides the 16M, the industrial 3D scanner is available in two more versions with a resolution of 5 and 8 million pixels. Different measurement volumes can be achieved with preadjusted optics. For automated quality control, the scanners are used in the standardized 3D measuring machine ATOS ScanBox. In these measurement cells, all measurement and inspection processes up to the inspection reports are executed automatically. This enables unmanned quality control in production environments, for example of cast, plastic and sheet metal parts and assemblies.

Tweet
More in this category: « ATOS ScanPort - New Desktop Scanner for Small Components Thank you for attending Capture 3D Innovation 2014! »
back to top