Benefits of ATOS Blue Light Scanner versus a CMM Machine

Optical metrology, including structured light 3D scanners like ATOS, is quickly revolutionizing the manufacturing industry. Many of the leading companies in the aerospace and automotive industries rely heavily on optical metrology to verify parts. Structured light scanners have increasingly become faster, more accurate, and easier to use. 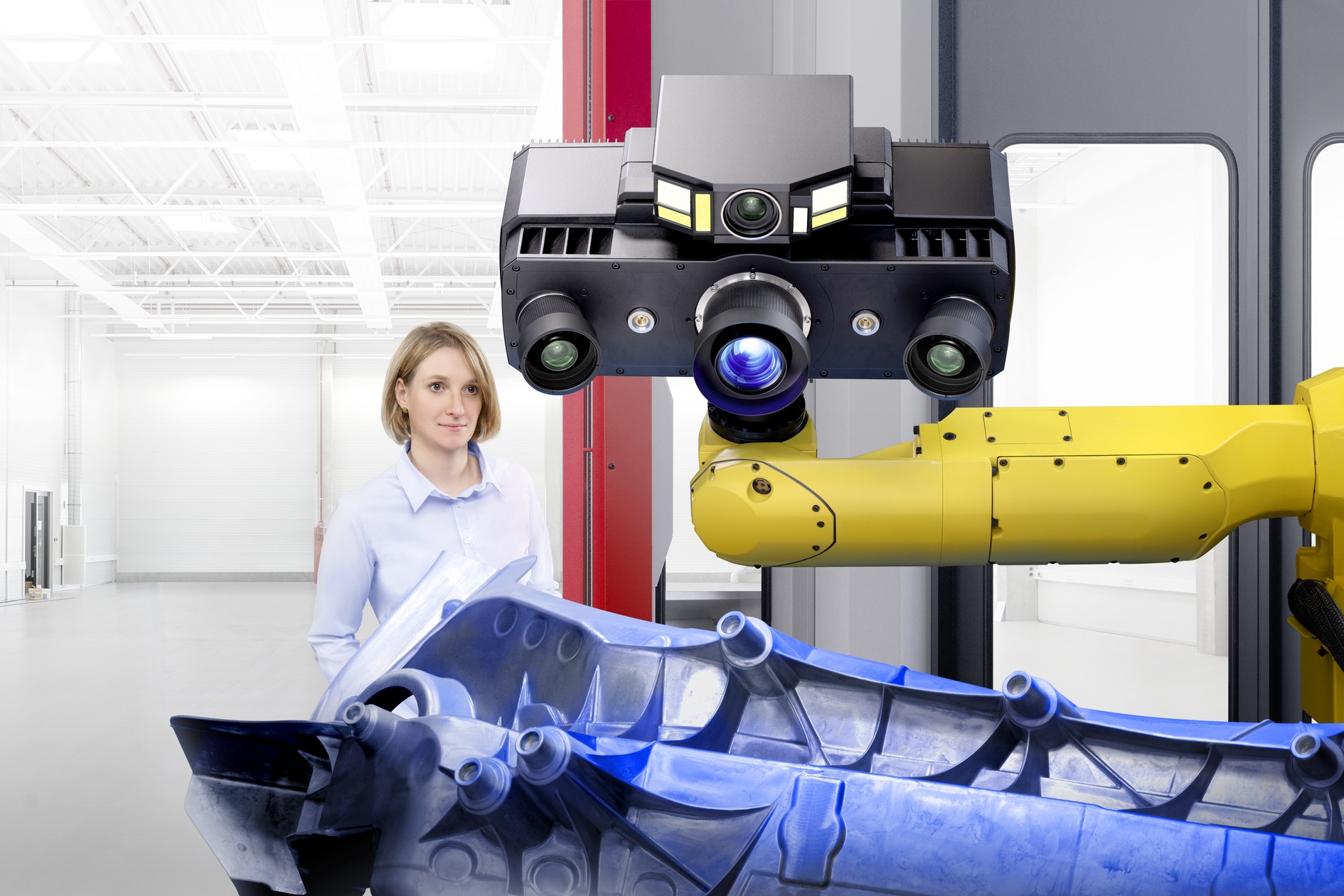 While some organizations and job shops still rely solely on traditional CMMs to measure parts, many are turning to ATOS blue light 3D scanners to modernize and expand their capabilities with full-field measurement data.

Smaller companies often assume the expense of implementing blue light 3D scanning is too high and that the return on investment is too low. However, with ATOS solutions starting at $33,450 USD, this assumption couldn’t be further from the truth.

In this article, we’ll cover the basics of traditional CMMs, provide an introduction to ATOS blue light 3D scanners, and explain how adding ATOS to your selection of metrology equipment saves your company time, money, and headaches!

What is a CMM?

A traditional CMM is a device that uses a probe to touch different points on a part to take measurements.

The CMM uses XYZ coordinates to reference the object’s displacement in space. A bridge CMM, one of the most common, allows the probe to move along these three axes, and each ax has a sensor that monitors the probe's location on that axis. The machine then reads the probe's position as it touches programmed points on the object and registers its location.

A bridge CMM has three parts: a frame that contains the three axes along which the probe travels, the probing system itself, and a data collection system, which usually consists of a machine controller, desktop computer, and software.

After the CMM takes measurements, the software produces a spreadsheet with a list of these points and their deviation from the tolerances specified in the design of the object. This “point cloud” of numbers describes the object’s shape.

More technologically advanced CMMs function in a similar way but with some key updates.

For instance, today, these machines can be handheld and portable. A portable CMM isn’t using just the three axes but the whole range of space around the object to take measurements. A trade-off for this type of CMM is that it requires a human operator, which introduces greater potential for human error.

Due to their high level of accuracy, CMMs once were the primary metrology tool on the market, but as technological advances create a demand for the digitization of their parts, manufacturers also need access to full-field measurement data to unlock innovative digital engineering strategies.

ATOS, Advanced Topometric Optical Sensor, is a structured blue light 3D scanner that falls under the category of optical, non-contact metrology. Instead of using a touch probe to measure predetermined points on the object being measured, the ATOS 3D scanner projects a fringe pattern of blue light across the part’s surface.

As the fringe patterns shift during each scan, the two cameras on either side of the projector capture the displacement of the XYZ coordinates to determine the position of the part and its measurements.

By taking a full-field scan of the surface of the part, ATOS captures all areas within the given measuring volume, allowing ATOS to capture problematic areas that traditional CMM may not capture.

ATOS produces a “point cloud” of measurements. When this point cloud is then compared to the CAD model (actual vs. nominal) within the software, it produces a 3D inspection color map that displays a spectrum of colors that signify areas in or out of tolerance. This visualization makes it easy for the operator to quickly determine which areas of the part are problematic without spending time deciphering a spreadsheet of numbers.

ATOS blue light 3D scanners require minimal setup and no specialized programming skills to operate. These accurate 3D scanners can also be integrated with automation solutions to further speed up the measurement process and increase throughput.

What are the Benefits of Adopting ATOS 3D Scanning Technology?

There are many benefits of adopting ATOS 3D scanning technology.

One of the major advantages is that with ATOS, the entire part’s surface is captured. With a CMM, “if you don’t probe it, you don’t know it,” as one of our customers noted. The CMM is preprogrammed to capture certain areas on a part, but if there is a section of the part that falls outside of tolerances and that area isn’t included in the selected measurement points, no one will know that the part is faulty.

ATOS blue light 3D scanners help alleviate this challenge by picking up every visible area. This results in incredibly detailed, accurate data full of millions of XYZ points that create a geometric digital twin of the part in minutes.

Another benefit of ATOS is the powerful software for comprehensive dimensional analysis, which includes 3D inspection color maps, GD&T, trend/SPC, surface defect mapping, and a multitude of inspection features for industry-specific engineering analysis such as airfoil, turbine blades, sheet metal, plastics, castings, and beyond. Additionally, anyone can download the free GOM Inspect software to run analysis at any computer and share the results between team members, customers, and suppliers.

ATOS and GOM Inspect software automatically create a 3D visualization of the part to make the results of 3D scanning easy to read and understand. The operator can tell exactly where the deviations on a part are just by a cursory look at the color map. GOM Software also generates CMM-like reports with tables of numerical data to make it easy to integrate measurement methods.

ATOS is easy to use and does not require any specialized programming.

CMM programming can frequently cause a bottleneck in production because of the amount of time it takes to complete. With ATOS, the setup is simple, and the sensor has self-monitoring calibration. Because of its ease of use, more employees can be trained to operate ATOS, which adds to the time savings it provides.

One customer, a Production Manager at Chicago Mold, said, “It takes us two hours to measure and inspect electrodes to parabola tools with ATOS. Previously, with our CMM, it took 50 hours to measure each electrode, including setup and programming time.

Instead of receiving a 20-30 page CMM report, we now receive instant inspection color plot results that are more easily understood and reduces the amount of time it takes to make required changes. Once the electrode is burned into the tool, it takes us ½ an hour to scan and inspect. With the CMM, it took us 20 hours.”

In many cases, the combination of more accurate, comprehensive data and time savings leads to money savings too. In manufacturing production, time is money, and producing a better quality part in less time allows companies to sell more products in a shorter time frame with less design rework.

A Sr. CMM Technician at Mann + Hummel said the company used ATOS for first article inspection to aid a tool tuning process and went from 3-4 iterations of the tool down to just one. Each tool iteration was about $25,000 to implement. “One project alone justified the cost of the ATOS,” he said.

ATOS captures intricate details on complex parts and accurate measurement data quickly with no specialized training or programming skills needed, resulting in significant time and cost savings. Are you interested in learning how Capture 3D can help you gain the benefits of adding ATOS to your metrology toolbox? Contact us today to learn more!

Tweet
More in this category: Best Uses of 3D Scanning and Its Applications »
back to top